We had completed Boeing 727 simulator training in Vancouver at CP Air’s training facility and flight training with Boeing in Seattle. We had all flown the 727 before and we were now ready to take delivery of a brand new aircraft at Boeing Field which we would ferry to the Middle East. The planned route was from Seattle to Sana’a in Yemen via Edmonton, Frobisher Bay, Keflavik, Amsterdam, and Athens.

The first sector to Edmonton in Canada was uneventful until the approach and landing. During the approach the first officer’s airspeed indicator hung up at 140 knots and was still indicating 140 knots as we left the runway. This necessitated an overnight stay while Boeing arranged to have a replacement airspeed indicator sent up from Seattle. It is often said that a brand new aircraft is the most dangerous to fly until the bugs are sorted out during the first 100 hours of flight.

He then handed it to me saying “Try it – you’ll like it!” There was no point in protesting that I would prefer marmalade because I would be flying the line with him for the next year at least. Charlie always had a jar in his flight case as it was not readily available outside of North America.

Having survived peanut butter and jelly I boarded the crew bus for the airport. Our next sector was from Edmonton to Frobisher Bay on Baffin Island in north eastern Canada just outside the Arctic Circle. Navigation was with a single omega unit.

We also had a Boeing flight navigator on board because single omega did not meet the minimum navigation specifications for a trans Atlantic flight. It seemed to me to be a false economy to spend $18 million dollars buying a brand new aircraft and to not include a second omega unit. Apart from the small additional cost, dual omega would have made the navigation much safer as well as negating the requirement for a flight navigator.

As we flew north towards the magnetic north pole, the compass starting swinging and was no longer a reliable direction indicator. The single omega unit worked well and we landed on an icy runway in Frobisher Bay in the dark with a strong cross wind. Frobisher Bay, with the chill factor from a stiff breeze, was the coldest place I had ever been in except for Iceland which was our next destination.

The fuel tanks were filled to capacity and the three gauges showed a total fuel load of 50,000 lbs. There were no reserve tanks on this particular aircraft. The 727 is a short to medium range aircraft and is not designed for trans oceanic flights.

An hour after landing in Frobisher Bay we were airborne and heading almost due east for Greenland enroute to Keflavik. The flight navigator, who was seated in first class with a portable LORAN set, passed up to the flight crew headings to fly to stay on track.

On arrival at Keflavik we entered a holding pattern at 35,000 feet over the VOR (very high frequency omnirange) which was located on the airfield. The control tower had just reported the RVR (runway visual range or visibility) as 400 metres in fog. This was well below our landing minima which meant that landing in Keflavik was no longer possible.

Here we were in the middle of the Atlantic Ocean with standard fuel tanks, almost half of which were depleted, with no place to go! It was a precarious situation to say the least. Chaos reigned on the flight deck and back in first class as everybody shouted different destinations.

The flight navigator favoured Bergen in Norway. This suggestion was quickly rebutted by George who had flown the North Atlantic for 20 years in Boeing 707s. He made it clear that in September at our estimated time of arrival there would be thick sea fog in Bergen. Finally, good sense prevailed and we set course for Prestwick in Scotland. George and some other pilots who were seated in economy, started drinking heavily in the firm belief that their airline careers would soon end in the icy waters of the North Atlantic. The chances of surviving a night ditching in the ocean would be close to zero. It was a very stressful flight constantly checking fuel remaining against distance and time to go.

At about 3.00 am the lights of Prestwick airport could be seen with almost no clouds and good visibility. On final approach, so as to ensure that the electric fuel pumps were not uncovered, a higher than normal approach speed was flown to reduce the angle of attack. Prestwick has a long runway so a fast approach speed was not a problem provided the engines kept turning so that reverse thrust could be used and to provide hydraulic pressure to the brakes.

On the ramp the flight engineer took an accurate measurement of the fuel remaining with dipsticks. He reported that there was 2,000 lbs total fuel remaining. This would probably not have been enough for a go-around and another landing attempt, had that been necessary.

A trans Atlantic flight in a Boeing 727 with standard tanks, unpredictable weather, degraded navigation equipment, and practically no alternate airfields, is an experience I would not like to repeat.

As the 727 descended through a thick cloud layer and I caught my first glimpse of the rugged terrain which makes up most of western Yemen, I felt excited yet a little apprehensive about my one year flying contract which was to be based in Sana’a in the Yemen Arab Republic, as it was known then. Before leaving Italy I had done a little research regarding the geography, weather patterns, and available navaids (radio navigation aids) in Yemen. After landing in Sana’a the first thing I noticed while walking across the ramp, was that my breathing rate had increased. This was because the airfield elevation was 7,216 ft AMSL (above mean sea level) which was equivalent to walking on top of Mt Kosciusko, Australia’s highest mountain. Just to the south of the airfield there was a 12,000 ft mountain. Most of the mountains in the Arabian peninsular are concentrated in Yemen.

On the ride into town we passed multi-storyed buildings constructed of mud brick with brightly painted walls. We overtook several carts drawn by donkeys and loaded up with household goods. The men were dressed in sarongs held up by broad belts with curved daggers attached to them. The women were completely covered in black burqas.

Reaching the town we drove down some dusty back streets to the Al Hamd Palace Hotel which used to be occupied by the Imam before Egyptian mercenaries invaded the country in 1962.

I introduced myself to a small group of American pilots who were sitting on the front steps drinking whisky without ice. I thought this was a little out of character until they explained about the corrosion in the city water supply and how they had been affected when they first got out there. Bottled water or soda was the norm for holding it all together.

One of the group complained that he had to climb 84 stairs every day to get to his room on the top floor. Some wit had determined that the energy expended was equivalent to walking up 256 stairs at sea level. That made a very good case for not forgetting anything that would necessitate a return to the room in the heat of the day.

Next morning while the eggs and beef bacon were being served, I asked my colleagues about the navaids in the country. Someone said “There aren’t any!” He then said “I should qualify that – there aren’t any precision approaches in the country, but there are a few antiquated NDBs (non directional beacons).

These are not much use when the needle points to the middle of a thunderstorm cell instead of to the airfield, during the two rainy seasons. Out here it’s bush flying with 727s!” It didn’t sound to me like too much fun with all the high terrain.

My first training flight was to Addis via Djibouti and Taiz which was only a twenty minute flight to the south of Sana’a. I asked if I could see the approach plate for Taiz. This was met with raucous laughter as they handed me the Jeppesen plate which was annotated Vicinity Chart Only – No Published Procedure.

As we descended towards the runway I could see why there was no published procedure. Taiz was 4,600 ft above sea level in a valley surrounded by high mountains. The published MSA (minimum safe altitude) was 13,800 ft. This meant that a descent could not be started without visual contact with the ground.

On the ground in Taiz I asked what the procedure was for approaching the airfield in bad weather during the two rainy seasons. This was of concern to me because we had flights scheduled into Taiz every day and sometimes twice a day. The chief pilot explained to me that they had two homegrown STARs (Standard Terminal Arrival Routes).

The first was unofficially designated the Chicken Coop One Arrival with the Ridge Transition for an approach to the south for runway 18. It consisted of breaking cloud at or above the MSA of 13,800 ft, looking for a Yemeni farmer’s chicken coops on top of a mountain, then turning east and transitioning along a ridge for a predetermined time before making a right turn to a heading of 180 degrees. Hopefully, there would be a runway somewhere in front of the aircraft. If there was a rapid descent towards the airport could be started.

The second was designated the City One Arrival with the Tower Transition. It consisted of breaking cloud at or above 13,800 ft and looking for the city of Taiz, then descending on an easterly heading in a valley until a radio tower became visible through the low scud. At this point the aircraft was turned to a heading of north, and with a bit of a luck runway 36 would be visible about 3 miles ahead of the aircraft.

Contract airline flying can be exciting, but with a good standard of airmanship should never be dangerous. It is well compensated, usually with a good tax free salary, and many of the usual airline perks.

After being in production for more than 20 years, Boeing will halt production of the 737 MAX in January 2020.

This follows two crashes that killed more that 300 people, causing the aircraft to be grounded for more than 9 months due to safety concerns.

Boeing customers have canceled 84 orders since the crisis began.

Airbus is set to deliver more than twice the number of aircraft in 2019 than its rival Boeing.

All statistics, facts, graphs and tables are free to use with attribution. 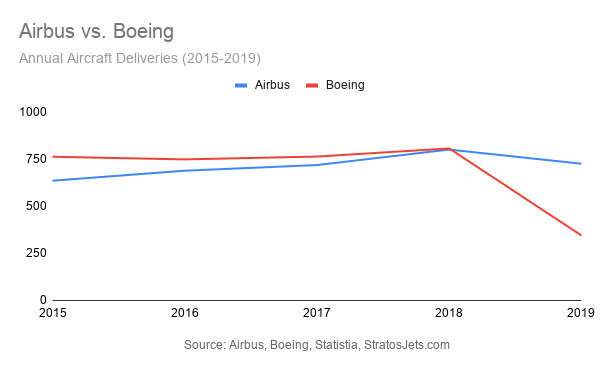 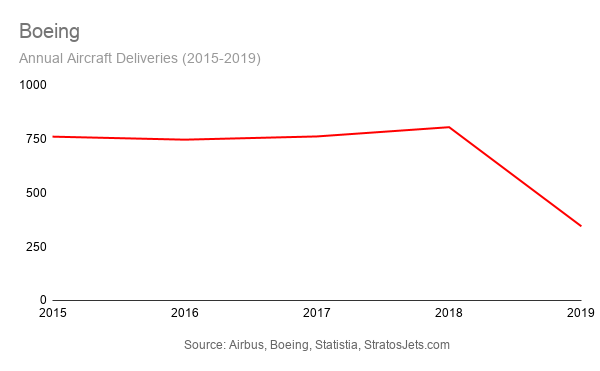 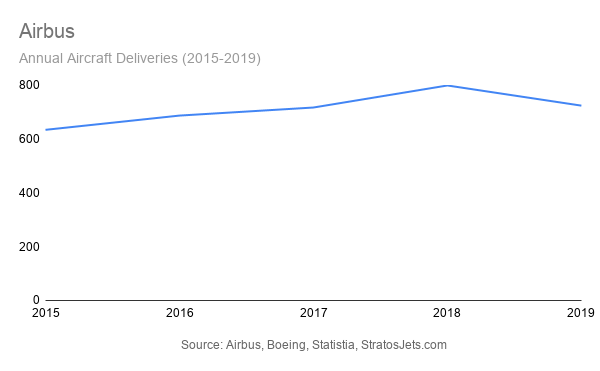 Airbus sales are down 9% in 2019, but remain reasonably consistent.