Private Jet Flights to Attractive Airports Around the World 06 Jan Private Jet Flights to Attractive Airports Around the World

Whether you’re traveling on a commercial airline or by private jet flight, your travels are so much better when you spend time in a comfortable, well-designed airport. Airport aesthetics have evolved to meet the expectations of sophisticated global travelers. Here is a quick look at five airports that are both attractive and efficient.

Our list of attractive airports for private jet flights is very similar to the first time Stratos Jet Charters visited this topic in 2015. (You’ll find that blog entry here.) The challenge with ranking airports is that, unlike the Superbowl or the Academy Awards, there isn’t a new group of competitors every year. But elegant new airports are being built, and existing airports are being improved, so it’s time to revisit our list of North American favorites.

A perennial winner, the white fiberglass peaks of Denver International echo the snow-capped beauty of the nearby Rocky Mountains. The interior concourses are devoted to commissioned artworks, creating an art-gallery vibe. Denver International is also a solar power pioneer, with 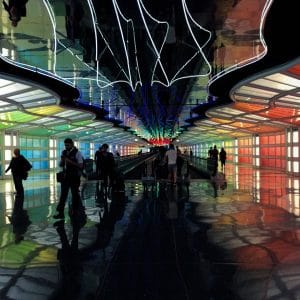 four solar arrays that provide 6% of the airport’s energy.

Brilliant neon illuminates the underground moving walkway at Chicago’s O’Hare in an eye-catching display called “Sky’s the Limit”.  Above-ground, the terminal is lit with skylights placed in high ceilings, creating a sense of spaciousness. Despite being one of the busiest hubs in the US, O’Hare strives to be roomy, clean, comfortable and functional.

Prior to hosting the 2010 Winter Olympics, Vancouver’s airport was substantially renovated to show off a uniquely west-coast design aesthetic. Featuring totem poles and west coast aboriginal art, the design reflects a calming blend of cedar, water, stone, and light. Vancouver is also regarded as one of the most accessible airports in the world, with facilities and amenities to improve travel for disabled persons.

Every year since 2005, Incheon has been rated one of the best airports in the world for attractiveness and efficiency. Incheon features high glass ceilings for natural light, plus a spa, golf course, gardens, a museum, and even a skating rink. Amazingly, despite these fascinating attractions, the airport is also top-ranked for customs and boarding efficiency. It’s the best of both worlds – efficiency when you are in a rush, and calm if you have time to wait.

It’s the second-busiest airport in India after Delhi, but also an architectural wonder. The interiors feature elegant white columns and canopy inspired by peacock feathers. It’s a bright, airy space in one of the busiest cities in the world. But it’s not all show. The airport has also won numerous awards for Green Infrastructure initiatives, for guided museum art tours within the airport, and for dedication to customer service.

A hundred years before the jet age, Ralph Waldo Emerson wrote, “It’s not the destination, it’s the journey.” But for modern travelers on private jet flights, it can be both.  Spending time in a beautiful airport can enrich your journeys.

When you are ready to book a luxury jet charter flight to any airport in the world, call Stratos Jet Charters at 888-593-9066.